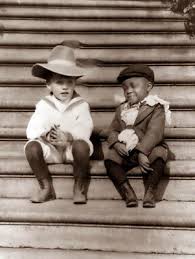 Out of all my childhood friends, there’s one guy I would love to see. I miss him!

Adade and I were close buddies with very different tastes. Haha! While I walked around in an over-sized faded t-shirt over jersey shorts, he would be in a rather too clean polo shirt, neatly tucked into his khaki shorts. It annoyed me greatly.

I always retorted when we met to go play with the other kids in the area. And so I was fond of pulling his shirt out of his shorts and running off giggling.

I tell you, from Pampanaa to Chaskele, this boy’s shirt will still be tucked in!! Eii.

Now to why I really want to see him. It was Christmas season, and all the kids in the area were hyper. A game of Chaskele, with me and Adadzewa being the only girls, had begun. With sweat running down my face as my tiny self boyish self ran all over the red-soiled earth, I did not see it coming – the crunched up tomato paste can. All i saw was red – blood flowing down my knee. It was Adade who had hit the can straight to my knee! I sat on the floor and sobbed, all the time pointing an accusing finger at Adade. I felt it had been intentional. Before the game started that afternoon, i had tampered with his shirt, and so I was sure, he had intentionally hit me with the can as payback!

The day ended with my knee bandaged, and a limp in my step.

The next morning, my cousins helped me build my own “buronyadan” with palm branches. It was big enough to fit three of me in there. I was sp proud of it I couldn’t wait to show it off. I then proceeded to go pick a fight with Adade for hurting my knee.

It soon got pretty violent and Adade ripped off a quarter of my roof (the buronyadan). CHRIST!  All hell broke loose!

We fought like professionals till we got parted and we each got spanked by our parents respectively.

The war had just begun!

Dawn of New Year… we had all come back from church, and all the kids in the area were out “throwing knock-outs” Adade was there too, with his shirt neatly tucked in. I had my own pack of knock-outs in my hand, and he was just loitering before me, his back turned. You see the temptation?!!

For the love of me, I have no idea what came into me when I struck that knock-out  against the match and stuck it in his shirt. But God have mercy, by the time he realized what was going on, his tucked in shirt couldn’t save him. The knock-out went off, and my bare feet just found their way home at top speed. My heart was pounding!!

A few minutes later, the other kids were chanting “Eheeeeh, Eheeeh” towards my house, and Adade had already been rushed off to the hospital. Seeing my dad roll his belt around his left hand was a sign of the end time. Y’all can imagine how mercilessly i was whipped.

What happened after, was between the two families. My parents had to take care of his hospital bills, I learned later.

It took sometime before we started playing again, although we had both been warned to stay away from each other…Adade no longer wore polo shirts. Just loose singlets that he couldn’t tuck in even if he wanted to. We soon moved out to our new place.

Now the thing is, I really want to see Adade, see and touch his scar.

I want to touch that scar and say “I’m sorry”….

9 thoughts on “TWO SCARS FOR CHASKELE”