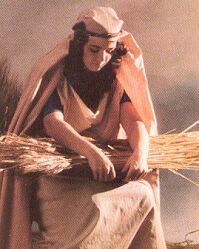 This woman, whose name is mentioned together with all the virtues any Christian woman should strive to possess, was a Moabite. A lot had been said about Moabite women, none of which were good. Their ancestor Moab, was the son that came out of the act of incest that was committed by Lot with one of his daughters. Ruth was a descendant of this unholy union. She was a foreign woman, a gentile. However, after the first few pages of her story I was already admiring her discerning eye. Ruth was wife to Naomi and Elimelech’s (Who were Hebrew) first son Mahlon, and had been raised in a pagan home. Yet when she became a part of her husband’s family, she took note of her mother-in-law, so keen was her interest that she made it a point to study her. Ruth recognized truth, and that is one striking quality of hers I found when studying her. She saw what others could not see, for she was not the only Moabitess in the home. Naomi’s second son had also married one named Orpah. It is said of Ruth that;

“From the time Naomi had told her about the true God, she had believed because she saw such peace in her mother-in-law. It was a peace that defied circumstances. Ruth had never seen such peace, certainly not in the house of her mother and father.”

She had seen the difference between her mother-in-law and her own mother, she had noticed that kind of peace described in Philippians 4:7 as the peace of God which passes all understanding. The kind that is an enigma, you can’t fully place your hand on it, but it is so unique, and evident in and around the person in whose heart it dwells. Not everybody notices it though, but Ruth did. She knew there was something her mother-in-law had that was much more valuable than the riches of the world. Naomi had the kind of wealth Ruth yearned for.

“Her father and mother took great pride in their possessions, but over the years of living with Naomi, Ruth had come to recognize her own parents’ poverty of spirit. There was a richness in Naomi’s life that had nothing to do with the house she lived in or the material possessions she had.”

Naomi’s faith had so impressed Ruth that it caused her to think deep thoughts, and discern for herself, what the truth was, and she found it. She found God by calm and patient observation, with a heart laid out, willing to learn, ready to learn. She needed no other proof, it was all evident before her, and it wasn’t in any of the tangibles, she couldn’t grasp it with her hands, she knew it had to be within, and so she was bent on doing anything, sacrificing everything, to be a part of such rare faith that granted such equally rare peace, joy, contentment. And so I was not surprised at her decision to go with Naomi wherever she went.

Note that, initially, both daughters-in-law set out with Naomi, but let’s look at these two young women closely;

“As they prepared to leave the house, Naomi wondered if they would even make it down the hill with all the things Orpah had decided to bring. The poor girl. She couldn’t bear to leave anything behind. She was loaded down with everything she had accumulated during her marriage to Kilion, including a small stool. Orpah moaned in distress, ‘Oh, I wish we could bring the table and rug…’ Ruth on the other hand, had only a pack full of colourful sashes she’d made, a skin of water, and enough grain and raisin cakes to last for several days. ‘where are the rest of your things, Ruth?’ Naomi asked. ‘I have all I need.’”

Did you note that?, she said she had all she needed, and that in actual fact, was virtually just herself. Orpah however had over-burdened herself with all that she had acquired in her lifetime, and still longed to pick up some more if she could. Ruth was not just following Naomi to Naomi’s home, she was following her to their home. She had accepted that home as hers too and saw no reason to carry any load. That is because home has everything she’d need and more. Orpah was not ready to go home, she hadn’t even acknowledged Bethlehem as her home, her heart was still stuck in Moab, she was trying to carry all her memories and parts of Moab along with her to Bethlehem, but that was not possible. She hadn’t been able to settle on what was most needful. Ruth knew the journey home will not be easy so she packed food, for survival; there was need for them to survive the journey. “I have all I need” she had said.

Don’t we do this to ourselves, even now, what Orpah was doing? We are undecided about going home, we are torn between the world and God’s arms, we attempt to go to Him, but we carry along bits and pieces of the world, we hold on to the petty gossip, we hold on to that guilty pleasure we have hidden so world, we hold on to memories that do not cause us to be remorseful but rather causes us to relish “those times” like they were some great achievements, we do not leave them behind and so like Orpah turned back eventually, so do we. She did not make it home. She walked back, with all her load, to the land of Moab. She was crying as she left Naomi and Ruth behind, she cried even more when she noticed Ruth had made a firm decision not to return. Deep within she wished she could that strong in her resolve but she couldn’t. She could not, because all along, with each step she took, she was hoping Naomi will beg her to turn back, convince her to go…she wanted a justification.  So there, we hear no more of Orpah. But look at what Ruth said in protest when Naomi pleaded with her to turn back;

“‘I won’t leave you. Make me your proselyte…I will go wherever you go…I will live wherever you live…Whatever your people keep I will keep, Mother, for your people will be my people…Your God will be my God…And may the Lord punish me severely if I allow anything but death to separate us!…how can I go back to my old life when you hold the words of truth? I’m going with you.’”

Ruth was ready to move straight into God’s arms, she was ready to start the journey and that is how it should be. “Come as you are” it is said. With daily food(bread) to keep you going, which is the word of God, prayer, worship, fasting; spiritual food needed to keep your energy up throughout the journey which is rocky, hilly, dark at some points, dangerous at other points. Yes, temptations, trial, doubts, abound on the road home, and so if you are not prepared as Ruth was for the journey, if you are as unprepared as Orpah was, you won’t make it halfway before you turn back.

Naomi could not insist anymore after such show of immense faith and belief in her God and so they started their journey, all through it, Ruth was her encouragement. This new convert constantly reminded Naomi that God was able, and was going to get them home safely. Many times Christians old in the faith forget who the God they serve is. They falter in their faith because a lot of the things they do has become more of a routine. They stay away from sin, pray, go to church, do other stuff in line with their faith but they do so because it has become habitual, routine-like. Such people need to be reminded that God is One who does not do a half-job. He completes the works of His hands. New converts, or born-again Christians, are always so charged up with the word, they are indeed a help to those already in the faith, and they bring in some youthful fire. They are important. Ruth kept Naomi going, through the journey, and even after they got to Bethlehem.

Ruth prayed for guidance. She wanted to be a loyal servant to her mother-in-law and their God.

“‘Oh, God, have mercy. I want to please You. I want to serve this woman I love who loves You so much. Please, I beseech You. Show me what to do.”

God answered her prayers, by leading her to the fields of Boaz, the son of Rahab and Salmon to glean; Boaz, one of the two remaining heirs of Naomi’s line. God had a plan for this faithful Moabite woman. Note also that although the initial reaction of the people for seeing a foreign woman in their midst was that of resentment, by her works, how she lived her life, could not keep them in that state. They couldn’t help but sing her praises in the end. This is what one of Boaz’s men said about her;

“All of them (the workers) look upon her with respect and admiration…She never leaves the company of the maidservants. She pays no attention to the men. Unlike some of our other young women, I’ve never seen Ruth do anything to draw attention to herself. She comes early to the field and works late. And she seems content with the work, I hear her singing with the maidservants.”

You see how she portrayed more virtues than the Hebrew young women even showed or had? She stayed out of trouble, she did not do things that will lead her into temptation, she was content with the little she had and all through it she prayed, not for herself, but for Naomi, for Boaz who had been so kind to her and for the family line which was threatening to die out if something was not done. But Ruth trusted God. Her trust in God was solid. She knew God will do something. And so she resorted to the best – prayer. She kept her requests at God’s feet. And God answered her.

Naomi sent her to the fields one night with a plan that will see them married if it worked; Ruth and Boaz. She was to go to him at night when he slept, uncover his feet and lie next to him. This act greatly interests me. There is a lot of debate going on about what exactly that act meant. The act of covering a woman with your mantle as a man meant you had wedded her. To do so without having married the woman whom you covered was considered an abomination. It had a sexual connotation. Why lay under one covering if you were not married? What Ruth did could have offset a scandal if someone had found out, but she trusted her mother-in-law, because she had prayed about their situation and she knew Naomi had been praying to and so she trusted and obeyed. It truly did result in marriage, out of which Obed was born; Obed the father of Jesse, who fathered David out of whom the Messiah came. Ruth’s praises continue to be sung even now, as I write about her. Her show of deep trust and humble obedience made her worthy of this honour.

What I learned from the woman Ruth;

Stay tuned for the story of Bathsheba.

4 thoughts on “RUTH [A LINEAGE OF GRACE]”