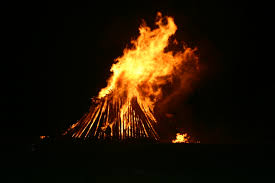 She stared for a very long time. Everything had been packed into dull brown unmarked boxes and the room stood bare and dusty. She knew she had to haul them out and set fire to them but she stood there. Behind her walls was a curious crowd waiting to see what it was she was up to. They had all heard and were waiting, perhaps for anything to latch on to and strike. Why was she doing this? She thought. Could it not be easier? She paced, her thoughts pacing with her. Occasionally her heart will stop for a bit and then beat rapidly on, making her breath catch. It was all so overwhelming, she felt weak yet very much grounded in her resolve to clear every single junk out of that house – and everything had been junk, including the mask she wore. She knew taking it off was what would calm her heart and soothe her mind, she knew. It was worn anyway, chipped in places, half-faded, yet she still wore it. Her face might be unwelcome for a while after taking it off, seeing it had seen no sunlight for God knows how long, she was going to look pale and alien till gradually it took on some colour enough to match the rest of her features.

They had all heard that something drastic had happened. The little that had reached their ears made them unsure what to do or say, but they were behind her walls biding time. She was going to come out eventually, they knew, and then what will happen will happen. The tears slid down beneath the mask, down her real face, making it impossible to wipe them and starting an itch she could not reach. The irritation grew as the tears continued to trickle down in copious rivulets and her panic grew. She broke out through the front door wheezing, clawing at the face which was hers but not hers. Sobbing, wheezing, coughing, she grabbed the sides tight and ripped it off, throwing it hard into the courtyard where a fire had already been started by an unknown person, but she did not care. The first blast of air that cooled her face had her crying even more. Why!? Why had she kept it on for so long!? The weeping and frantic gestures had the people behind the wall dumbstruck, stuck to where they stood. Hands had gone up to shade eyes…from what? She wondered and stood straight. It was already night. She had not yet realized how bright her face glowed.

With a reinforced will she boldly walked inside to where the boxes were, one by one, carried each out and into the growing fire. Soon it was all gone up in flames that lit the night sky and they still stood and watched as witnesses, saying nothing, doing nothing else. As they burned; all of her life before her eyes, slowly but surely, she felt it – and it was what she had believed she would feel.

Second after second, she ceased dying.