As some of you may already know, I am half Ghanaian, half Nigerian and my name indicates it’s my Mom who’s Nigerian – she is a Yoruba Woman (Hello, Simbi!). I first heard of Amos Tutuola, a Yoruba man (lol) from her; she was telling me about writers she enjoyed reading back when she was in school, and she recalled with a sparkle in her eyes, I sought to find out more about him. And my, when I did! My first reaction was

HAVE WE NOT READ

I was then an undergrad (third year), and as a literature major, I was very sad I had to learn about Tutuola outside of class, and oh yes, we never did learn about him in any of my African Literature classes (we don’t even have enough of those so…) By now it is clear that I have a lot of grievances about the Department of English in the University of Ghana, and the courses that are available to be taken under literature. I might veer off what I intend to talk about and rant about how some English graduates today DO NOT KNOW WHO AMOS TUTUOLA (among others) IS, and go on and on about how that is not wholly their fault. But yes, the situation is sad, I won’t mince words, and we do need more time/period-relevant courses in the literature department. I will not comment on the language department (I will leave that for someone else – especially phonetics LOL! Hi Kafui!).

Anyway! What is there to know about Amos Tutuola? First of all, he is among one of the earliest West African Writers to emerge on the world scene, and his first novel, The Palmwine Drinkard (Yes, ‘Drinkard,’ not Drunkard) was the first African novel published in English, outside of Africa (1952).

Amos Tutuola, according to Bernth Lindfors, by early nineteen-seventies, had become “the subject of several penetrating studies,” and was recognised as “a significant albeit curious author who had earned a special niche in the history of African Literature.”  And he went on to admit, that although the works of Tutuola might be “crude and unkempt” (Don’t worry, I will share some excerpts from his first novel, you will understand), they however possessed “an elemental vitality which the polished writings of more sophisticated authors too often lacked.”

Tutuola was, among Western Critics, known as “the naïve prodigy of African Letters.” Now whether or not I agree or disagree with the observations Lindfors made, is not much my focus in this write-up.

I merely am introducing the man to you as I have come to know and enjoy him, and to add that his name needs to go up on our African Literature course outlines, and made bolder in the studies of African Literature (students are too quick to list the Achebes and Okigbos at the mention of African Literature, I wonder if they truly appreciate these great men or it has become a shallow mantra).

Ok, so who is Amos Tutuola?

He was born in Abeokuta, Nigeria, in 1920, where his parents Charles and Esther were Yoruba Christian cocoa farmers. When he was about seven years old, he became a servant for F. O. Monu, an Igbo man, who sent Tutuola to the Salvation Army primary school in lieu of wages. At age 12 he attended the Anglican Central School in Abeokuta. His brief education was limited to six years (from 1934 to 1939). When his father died in 1939, Tutuola left school to train as a blacksmith, which trade he practised from 1942 to 1945 for the Royal Air Force in Nigeria. He subsequently tried a number of other vocations, including selling bread and acting as messenger for the Nigerian Department of Labor. In 1946, Tutuola completed his first full-length book, The Palm-Wine Drinkard, within a few days. In 1947 he married Victoria Alake, with whom he had four sons and four daughters. (credits to Wikipedia)

I will succumb to the temptation to repeat that his BRIEF education was limited to SIX YEARS…ONLY! (Please read it again). Yes, and that was the first thing that got me even more interested in him. This was a man who was not highly educated, but was so bent on telling the stories (stories he claimed no one had time anymore to listen to), he decided to write them down, and so,

“Writing roughly with lead pencil three hours each day for five days, Mr. Tutuola then produced the first work of literature to be written in English by a West African and published in London,”

Critics from Nigeria and other parts of Africa however were not happy about the growing popularity of Tutuola’s novel and his other works that followed. This is because of the nature of the story and how it was written – this was how Dylan Thomas described it – “This is a brief, thronged, grisly and bewitching story, or series of stories, written in young English by a West African…” and by ‘Young English’ he meant, unsubtly put, poor grammar (let’s not forget Tutuola was not highly educated). His English was mostly a mixture of pidgin and direct translation from Yoruba, and yes, the editors chose to not tamper with it, and I think that was a good idea – it adds to why I appreciate him so much. 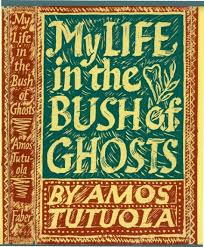 Another thing I absolutely admire about the man is that he was so humble, shy and polite; unaware of the impact he was making and the raucous he had incited among the literary elite of Africa at the time, which is why he was tagged as naïve.  Now I have my own opinions about whether or not the attention his works gained from Western Critics was good for the general Image of Africa in Western eyes (Many educated Nigerians were embarrassed by the ‘mistakes’ they found in his English, which some of them seemed to regard as an undeserved reflection on the African race in general), but again, that is not the focus of this write-up so I will not talk about that. In an interview with Eric Larrabee, a journalist with The Reporter, Tutuola, after being told, with evidence, how popular his second novel, My Life in the Bush of Ghosts had become, said in shock;

“The grammar is not correct at all. I made many mistakes.” In his own eyes, he was only a messenger in a government institution, and did not see that he could make such an impact. He was still in disbelief when the journalist asked that he autograph a copy of the book for him.

“What do you want me to write?” he asked the journalist, and after signing, he added, “I think, when you reach there, the USA, you write  a letter to me…so I know you not forget me.”

He needed, I believe, to be sure, that he was not dreaming. And yet after it became clear that it was not a dream; his first novel had been both a hit and a good kind of trouble stirrer, and so had his second, he remained as humble as he had always been. He only set out to write the stories he wanted to share just for the love of it (Tutuola wrote exactly as if he were entertaining a group of friends with his fantasies on a moonlit night, Gerald Moore observed), and that is what he did, bad grammar and all, he did! That is some inspiration right there!

I could go on with this, because I have done no Justice to him at all, but for length’s sake I will cut this short by ending here.

I’ll conclude with a few quotes from his first novel, The Palmwine Drinkard –

“I was very ashamed and thought within myself that if I return to the Skulls’ hole or house, they might kill me and the forest was very dangerous travel always, again I could not go directly to the Skulls in their hole and ask them how to loose away the cowries which was tied on the lady’s neck and to make her talk and eat.”

“Then I showed the tapster my wife and told of how when I went to a certain town and her father who was the head of that town received me as his guest, my wife was taken to a far forest by a gentleman who afterwards was reduced to a “Skull” and how I went there and brought her to her father, so after he had seen the wonderful work which I did for him, then he gave her to me as a wife and after I had spent about one and half or more years with them there, then I took her and sought him about. And how before reaching there, we met much difficulty in the bush…and we were traveling from bush to bush every day and night, even many times, we were travelling from branches to branches of trees for many days before touching ground…”

And to add finally, a quote from a review by Gerald Moore [Amos Tutuola – A Nigerian Visionary] –

“The most valuable part of Tutuola’s example is his confidence. This confidence transforms even his apparent disadvantages into special virtues, for his fragmentary education is seen to have left him in tune with great imaginative life of his race, while his command of West African idiom enables him to create a style at once easy and energetic, naïve and daring. By going into himself, Tutuola has rediscovered the great common soil of literature, which mere imitation…could never have shown him.”