Time present and time past

Are both perhaps present in time future,

And time future contained in time past.

If all time is eternally present

All time is unredeemable. 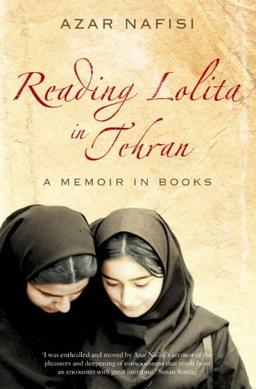 This is a true account of a professor, Azar Nafisi, who started a Reading Club with some girls from her Literature class. This is not just a memoir in books, as the title says, but also bits and pieces of Iranian history, and the stories of these Iranian girls. From Nabokov to Fitzgerald, to Austen, the club explore literature, share their thoughts, fears, grow together, laugh together. We see the struggle of women in the academic world in these Iranian Universities, of young girls wanting to have choices and being free to make one or the other. We are told of characters that make our blood boil, we meet others who warm our hearts, and aside that I could see myself being Nafisi…wanting to change the feel in the classroom, open the blinds, let some sunlight in, let students breathe as we learn from each other, I love this book also because it takes me through other books.

She had me thinking of Power n’ Oppression, The Writer, The Reader, Literature, Art, Freedom, and yes, Time! Honestly, #TimeNoDey, and so in the face of all that was against Nafisi and the other revolutionaries, they had to act immediately, damn the consequences. I’ll try and go through a few of the loads I can’t keep out of my mind.

Nafisi’s described how female students in the University of Tehran were required to dress, complete with their hijabs (veils); only their eyes or at most their faces, were to be seen. She points out how the hijab had lost its meaning because of its imposition. A woman losing the choice to wear it or not left it without any essence. She talks of one of the seven girls in the reading club, Mahshid, who before the imposition, wore the hijab, and was mostly one of a few women who did, wherever she was…

I was glad to note that Nafisi, who had refused to wear the hijab herself, and for which she was fired, was not preaching against the veil. She was preaching against how it had been forced onto them. She was fighting the powers that wanted to control the lives of people who should be free – as far as dictating how to appear in public. It was that oppression, she was fighting against. In Mahshid’s case, her choice had been taken away from her too, cos even though she loved the hijab, she looked no different, not in the least bit unique, and that was or is heartbreaking. It reminded me of a true account I read in Half the Sky  of one of the middle-Eastern countries where a school was burning, and while the girls were trying to escape, local police forced the veil-less ones back inside to put their hijabs on before they will be allowed out. Yes, more than should have, died. The extent of it shocked me, and reading this book too.  The early part of the book where these girls, go to Nafisi’s home where the club meetings were held, and one by one took off their veils and cloaks to reveal bright-coloured clothes, different shades, texture, length of hair, and features that made each of them unique, is when we review Nabokov’s Lolita with them. In my opinion, a very disturbing book. We go through a bit of Invitation to a Beheading, another of Nabokov’s books, which I believe Nafisi brought in because of how it resonated with the reality they were in.

The worst crime committed by  totalitarian mindsets is that they force their citizens, including their victims, to become complicit in their crimes. Dancing with your jailer, participating in your own execution, that is an act of utmost brutality. My students…enacted it…every time they went out into the streets dressed as they were told to dress. They had not become part of the crowd who watched the executions, but they did not have the power to protest them, either…There was not much difference in our jailers and Cincinnatus’ executioners. They invaded all private spaces and tried to shape every gesture, to force us to become one of them, and that in itself was another form of execution.

I have always been of the view that reading is an empowering art! A lot of the time when I hear certain stories in which it seems to me that young girls cannot see beyond what is in their immediate surrounding (even with those which they see but see half-inch in), I think of reading, writing, imagination, as windows through which to set them free! Nafisi had that view, hence the reading club she started. It is liberating, such trips through other worlds aside yours, opening your mind to other possibilities aside what you face. Leaving you daring, fearless, ready to break free because you know there is more than what you have, and if what you have is sh*t, why, fight for  better, cos much better exists! The constipated oppressors could not wrap their minds around any of it. This brings me to The Great Gatsby, another Western Classic that was banned in Iran. Nafisi not only discussed this book with her small club, she decided to defend it in a moot court. It was a hilarious scene, and the most highlighted part of my copy of the book. To begin with, this is what the prosecutor said;

This is an Islamic court, not Perry Mason, I can present my case the way I want to, and I am setting the context. I want to say that as a Muslim, I cannot accept Gatsby.

…our revolution is opposed to the materialism preached by Mr. Fitzgerald. We do not need Western materialisms, or American goods.

Which reminded me of a quote from Nawal El Saadawi’s Prologue to God Dies by the Nile, about hypocrisy in Egypt with the insistence that women wear veils and in the next breath with men drooling at naked pictures of women in Western ads.

It quickly brought in the reader as a critic, and how their blind criticism was injurious to not only themselves, but to the writers too. Zarrin, one of the ladies defending Gatsby said it all;

Could one not say in fact that this blindness or carelessness towards others is a reminder of another brand of careless people? Those who see the world in black and white, drunk on the righteousness of their own fictions.

Then it moves to the writer, and how such reactions and criticisms can paralyze them.

The Islamic revolutionaries seemed to believe that writers were the guardians of morality. This displaced view of writers, ironically, gave them a sacred place and at the same time paralyzed them. The price they had to pay for their new pre-eminence was a kind of aesthetic impotence.

And that is a writer’s nightmare.

REPRESENTATIVES OF GOD ON EARTH

Aside the ‘Gatsby Trial’ which was outrageous, because so much distaste could be had for mere fiction, throughout the book we see how people of ‘authority’ misuse these positions. Everything was a battle between God and Satan for them, and they wrote all the rules. There was no reasoning with them. The least resistance they met or whiff of evil they smelt, they uprooted the source and burned it.

Before Nafisi left University of Tehran, she had tried to reason with the authorities. Yes, she was already ‘a bad nut’ since her refusal to wear the hijab plus the club she had started and the fact that they read ‘Immoral Western Classics’. According to her,

“That day I realized how futile it was to “discuss” my views with Mr. Bahri. How could one argue against the representative of God on earth? Mr. Bahri, for the time being at least, derived his energy from the undeniable fact that he was on the side of Right; I was at best a stray sinner.

It was the last straw for Nafisi. The war bewteen 1981 and 1988 that hit Iran, is only a little piece of what Nafisi recounts. She struggles with reality. She wants to remove herself from it, and the only way she can is to invent games in which she barely exists. She had become irrelevant, with all her intelligence and ideas, she was disregarded. She had questions!

For a long time, I wallowed in the afterglow of my irrelevance. While doing so, I was also unconsciously examining my options. Should I give in to this non-existence imposed upon me by a force I did not respect? Should I pretend to comply and then cheat the regime in secret? Should I leave the country as so many of my friends had done or had been forced to do? Should I withdraw from my job in silence the way some of my most honourable colleagues had done? Was there any other option? Her sole solace was in books.

Eventually, she moved from Iran to the US, in 1997 and has been there till date. It was tough decision for her, but one that she had to take. Her students and members of the club kept in touch with her. Some of them moved, some stayed and pursued their dreams right there in Iran, fighting the status quo as they went.

A word that was coined by Nabokov in Invitation to a Beheading, and one that Nafisi agreed with the girls was open to any meaning one wanted to give to it. For me, that was her first lesson to them, as well as a gift – the gift of choice, of freedom to take something in whichever way you want it. For Nafisi, it was the impossible joy of a suspended leap, another thought it was a name of a dance…”C’mon baby, do the upsilamba with me!”…A small silver fish, a sound, melody, someone’s magical name, the paradox of a blissful sigh, the magic code that opened the door to a secret cave filled with treasures. Upsilamba is coded.

There is so much more this book touches on that I do not talk write about here, as usual, but yup, a good read, eye-opening, absolutely upsilamba!