“There will be no ceremony and no burial…just relief” 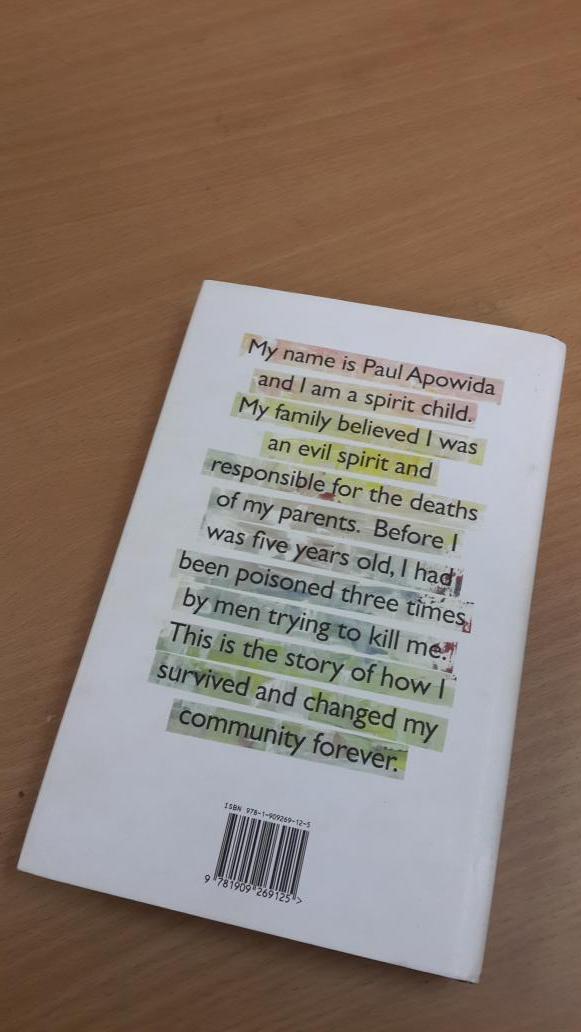 This is one of those books that I spot and know immediately I must read. The only unfortunate thing is, it’s borrowed, but trust I’d get my own copy when I find a bookstore that has it. It is the autobiography of a young Ghanaian, Paul Apowida.

“Back then, from a distance, the hill seemed to be covered with large, pale stones. They were oddly shaped, broken in places, with jagged holes. Closer in, the stones suddenly would come into focus, and no longer look like stones at all. They were small skulls; the tiny remains of murdered babies, some partially covered by rocks. These babies were beaten, some poisoned, by men who weren’t taking any chances.”

The skull of baby Paul Apowida would have been part of that Gothic hill, if a German missionary had not picked him up, after a poisonous concoction had been pushed down his throat and he’d been thrown out of the compound into the sun, naked.

Before you cry ‘wicked!’ let’s look at Sirigu, a village in the Upper East Region of Ghana, and what was happening there in astronomical numbers, some not-too-many years ago. Now, it is believed that fewer and fewer families are tied by this tradition, although the fear of Kinkuru still pushes some families to murder innocent babies.

“This savannah sunset is a warning to complete the chores before being plunged into darkness. There is no electricity and lighting is a luxury that families simply cannot afford. So people rise and go to bed with the sun….Because Sirigu is so close to the equator, the sun rises at five nearly every day, and sets at six, with little variation.”

The architecture of the place is bare, desert ground, seasonal fields of millet, mud houses built in spirals, housing huge families, a few wells and a market ground.

A very superstitious people, the inhabitants of Sirigu revere and fear soothsayers who are the media through which the gods speak…whatever these soothsayers say must be obeyed, because the gods have spoken.

When he was still a toddler, Paul’s family died; his parents, grandmother, and 5 others…in one day. The cause of death was Cerebro-Spinal Meningitis (CSM) which still sweeps through the three Northern Regions almost every year, killing both adults and children. This is what happened to Paul’s family…but Paul was not infected.

“It’s easier to blame problems on a vulnerable child who can’t defend themselves.”

And that is what a Kinkuru (Spirit Child) is…a poor, defenseless child. Reading this book and discovering what would make them tag a child a kinkuru, left me so upset, I had tears in my eyes! I was even more upset knowing nothing has changed much. In Paul’s case, eight of his family members died on the same day. It was CSM that killed them. The rest of his family, and nearly the entire village and their gods pointed their accusing fingers at a boy who was barely past a year old. Paul was not seen as human, but as something dangerous that had to be dealt with once for all. He had to be killed. Numerous babies had been killed because of such disturbing ignorance…

“Spirit children are possessed. They are malicious demons intent on causing trouble. They may use their evil to kill members of the family (as was with Paul), to bring bad luck or bad health, or drain away the family fortune…Spirit children come in many different forms. Some are easy to spot (imagine that!): those children born with deformities or disabilities are quickly labeled spirit children…ugly babies (really?!), babies with large heads and tiny limbs might all be called spirit children. So might babies who cry all night, or who stare into their mothers’ eyes when they are feeding (!!!!!!!).”

You’d think these long-dead…no way we’d hear of such happenings, but I am sad to say that is not the case. There has been improvement, however.

Towards the end of last year I was taking my tutorial class through the drafting of Ethical arguments and decided to split them in two groups, one arguing against the other on Euthanasia or Mercy Killing. One of the students mentioned a case that had just come up in the news – a baby born with deformities. Now, the way this young boy described it and concluded the baby was either not fully human, or according to him, some of the radio stations were saying the woman looked like she ‘bleached’ and she probably had such a baby because of that. I asked this student to slow down and describe the baby to me, and he was not even halfway through it when I knew it must have been a Harlequin Baby the woman had. This was a university-level student, also passing on the ‘spirit child,’ ‘mother bleached’ story, creating some spookiness out of a very normal albeit abnormal event.

Just this year, it was on the news that a woman and her boyfriend had tied the woman’s daughter to a tree behind their house because they believed the child was possessed. They only gave the child water occasionally and it was because a neighbour heard the child’s cries one day that got her rescued, and her parents(?) arrested.

And if you are thinking this is an image from 1900, then I am again sorry to say this is happening in Ghana now.

My focus in this review, is on Paul Apowida, as a living kinkuru, and how certain individuals, stirred the true feelings and reactions of these women whose children were being killed. This is not to say I blame the men who made these decisions wholly, the soothsayers, or the concoction men, but one thing I did think of while reading the first few pages of this book was why the women were silent.

Fear. This book revealed so much levels of fear, it was sad to keep reading. First of all, as i mentioned before, the soothsayer is the mouthpiece of the gods. After Paul’s family died, his Uncle Inke, went to consult a soothsayer;

“The soothsayer listened to the complaints in silence, then turned to collect his idols. He laid them on the ground, arranging them in the correct order, then performed his ceremonies. Chanting his hypnotic and strange songs, he entered into a sort of trance, leaning back to talk with the ancestors and hear what they had to say. When he opened his eyes, he nodded. The ancestors told him the truth. Inke was right to be afraid.”

The message was clear. Paul was a kinkuru…and he had to be killed. The concoction man then had to be contacted, and he had his own ritual to determine whether or not his poison must be administered.

“The women were shooed away. The concoction man took a black and white chicken, and held it squawking into the sky….he sawed at the chicken’s throat…then he threw it, almost casually, onto the ground….the position of the chicken meant yes.”

And thus, by the hurling of a dying fowl, was Paul’s fate decided. The poison was for him. How could they not fear, after the gods themselves had said he was a spirit? The women who carried these children and suffered through labour to have them, are mostly afraid too. Not only of the kinkuru, but of what their families would do or say, should they resist. However, when Paul landed in the hands of a local nun, Sister Jane, and she took him in, started raising him as hers, caring for him…when soon enough Paul was running around; a healthy tod with a football permanently attached to his foot, in spite of the fact that his family had attempted not just once, not twice, but five times, to kill him, the women started leaving their kinkuru at Sister Jane’s door. They were relieved! Finally, their hearts would stop breaking over and over!

Eventually it grew bigger, interventions started…fewer and fewer kinkuru were being murdered, as Sister Jane and the people she got to support her, reached out to this community, talking to them about some of these things they saw as strange and therefore a sign of kinkuru…breaking the myth bit by bit.

There are a lot that pointed to the fact that these soothsayers and concoction men were benefitting, from the kinkuru craze, because they were paid for their services, but they too believed they were doing it to rid the land of these ‘evil spirits’ and would go out of their way, as they were doing with Paul, to make sure all kinkuru were dealt with.

When a woman marries, she is expected to have children. What some women go through either because they choose not to have kids, or are unable to, due to various conditions, some of which are the fault of their husbands, are disheartening! Sometimes, a woman conceives, carries to full term, has a healthy/not-so-healthy baby, something goes wrong, some illness or accident, and child dies either as a baby or a toddler. When this happens once, it is mostly considered a tragic loss and merely that, but when it happens again, and then again, then we here Awomawuo being whispered. It is called Abiku in some parts of Nigeria. In Akan culture, such a child putting its mother through this cruel Awomawuo, is targeted. When again this woman gives birth, the child is quickly given a degrading name. They could name it Sumina (Trash), Donkor (Mule or plainly, Animal, Slave) or Babone (Evil Child), then the child is marked, mostly on the face. This is done because they believe when they make the child undesirable, taint it, the spirits on the other side won’t take it back in when it tries to go, and so the child would have no choice but to stay. Just like the kinkuru, this child is already believed to have a ‘naughty’ spirit, even dangerous…and with the marks and the name, this child grows with this stigma around it. Again, there have been drastic improvements all over, and the fact that someone is called Donkor now, does not mean the person was an Awomawuo child, no. People name their children after people they love and respect, to pay respect, etc. Some have surnames like these that really do not mean anything. But the truth also is that, in some of the very rural areas, this still happens. A kinkuru today might not be killed, but it is feared, shunned…that…that stigma…is not fully dead.

The change that is needed, must start from the minds of the people believed to be the custodians of the traditions of the lands. Just as information was disseminated in Sirigu;

So must the chain of positive change travel. From the very top, to the next, to the next, in a loud, elaborate, much needed game of Ghanaian whispers!

I have not even slightly exhausted this book, this may pass as Part 1/2. But I will end here, seeing this is already too lengthy. Maybe another time, I’d focus entirely on Paul’s journey from a village that wanted him dead, to a uniformed man in Britain. 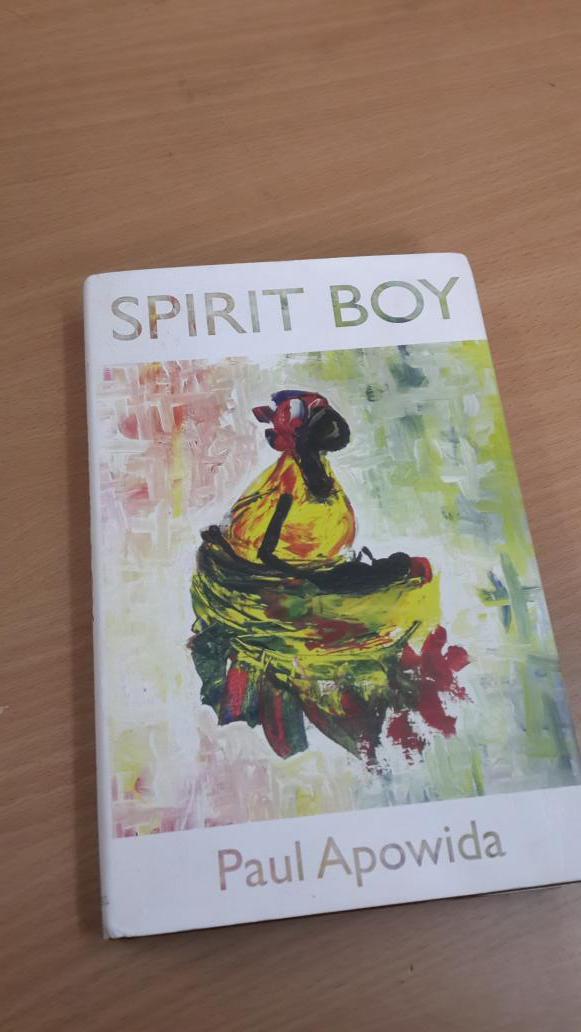